Radon is a naturally occurring radioactive gas given off by the decay of uranium in soil and rocks. Radon gas is found all over West Sussex it's in the air in miniscule amounts.

Radon has no colour, taste or smell. Levels vary from country to country, region to region and even from house to house in the same street. In open spaces, when radon mixes with air, it is quickly diluted into the atmosphere. But when air containing radon rises from the soil and rocks beneath your home it may find its way in – mainly through cracks in floors, walls and gaps around service pipes.

High radon levels in existing houses can usually be reduced by changes to the ventilation system, such as improving underfloor air bricks.

A fairly common enquiry received at the Council is that of a house-buyer wanting to know about radon levels in the property they are about to purchase as a result of information from a survey.

Radon is one of a family of elements known as inert or noble gases. Inert gases are all colourless, odourless and have no taste or smell, making them difficult to detect without instrumentation. Radon has a property unique to the inert gases in that it is radioactive and is usually formed from the radioactive decay of uranium. When uranium decays it first forms radium and then radon. As it changes from radium into radon it also undergoes a physical transformation as it turns from a solid into a gas and therefore escapes from the rock or soil into the air. Eventually, radon will further break down into harmless elements as the radioactive decay sequence is completed. Radon is a very rare element and at ordinary background levels it poses no health risks to people or animals.

However, certain types of rock contain relatively high concentrations of uranium and in these areas, radon concentrations can be many times higher than normal background levels. There are several areas of Britain where this is the case, including most of South-West England, West and North Wales, South and East Midlands, the Pennines and Northumberland.

This area, along with a large number of other areas has been designated as a “Radon affected area.” The definition of a “Radon affected area” is one where more than 1% of homes are expected to be above the Government's Action Level of 200 Bq/m3. If a survey indicates the presence of radon gas in a particular post code it does not mean radon gas has been detected at any particular  property.

Devon and Cornwall have far greater exposure but the risks are still extrmemely low. 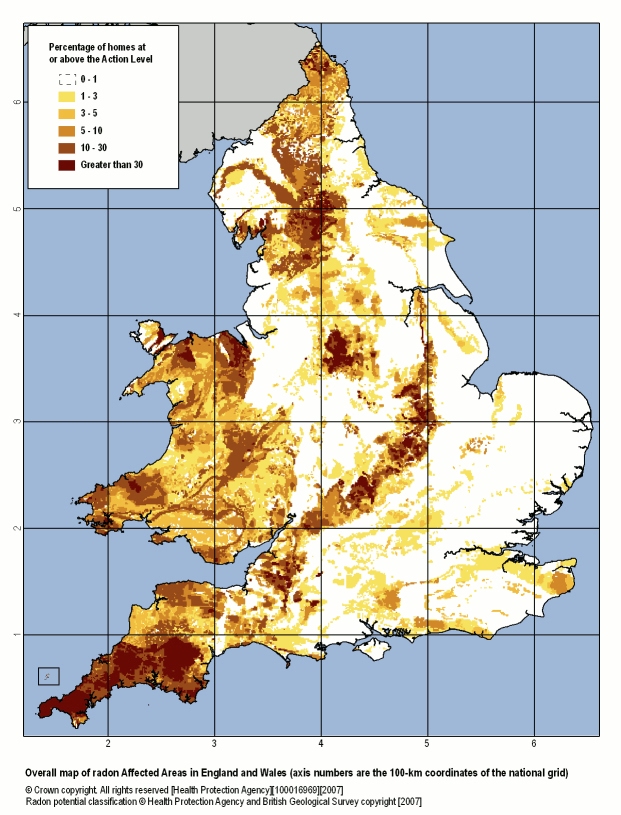 https://cooper-adams.com/blog/radon-gas-information-in-the-uk
Go back to the blog